Chest Training MISTAKES That You Must AVOID!!!

Hello everyone! It’s time to talk about some chest training mistakes that I see so many people (myself included) making when they’re working out. Today I want to share with you some of the tips that will help accelerate your chest growth quicker than you have ever imagined. Let’s begin the QUEST for a bigger CHEST.

Let’s start with chest training mistake number one, protracted scapula. I get SO many comments from people saying: “Tanner, I’m doing the bench press, but I’m really not feeling it in my chest, I’m feeling it more in my arms”. Now I’m sure that sounds familiar to some of you…

The problem is, that many people perform the bench press with a protracted scapula. What this looks like is: the shoulders are rolled forwards, making the shoulder blades protracted, which causes the shoulder to be elevated a lot more than it should be while performing a bench press.

Not only is this bad for you trying to hit your chest, but it’s also bad for impingement. When your shoulders are in this position you’re actually going to be taking a lot of the load off of the chest and putting a lot of it onto your shoulders. Thus causing the problem of, “I feel it more so in my arms and my shoulders”.

In order to maximize the role that your chest plays while performing a bench press you have to follow this setup. You have to retract the scapula, set the shoulders down, keep them depressed, then perform your bench press. From this position, your shoulders will be put back into the proper position and your chest is going to be put in the position to do the majority of the lift. This will allow you to feel the exercise more so in your chest, rather than your shoulders.

But with the dumbbell bench press, there’s more stability required, which is good, but the main part is as you’re pressing those dumbbells up and you start to actually bring those dumbbells to a nice wide position, bring them closer together at the top. This will get you more shortening on the chest while you’re performing a dumbbell bench press; which will recruit and activate a lot more of the pec muscle fibers.

Looking to Transform your Physique? Click Here To Get Started With Our FREE Fitness Quiz

The final point I want to make for mistake #3, is that too many people are trying to lift as much weight as possible. Often times, people will lift the most weight that they possibly can. This means they’ll likely be in a rep range of one, three, or five. This is a great technique to follow for training strength, not so much for training hypertrophy. I would strongly recommend that you increase your rep numbers to ten, twelve, or even fifteen repetitions, so that you can get a higher time under tension.

Speaking of time under tension… We’re going to get into the isolation exercises! This is one of those chest training mistakes that absolutely destroy your growth potential for your chest. Now, when the average gym-bro is going to go into the gym and begin doing some isolation exercises for the chest, they’ll hit up the pec deck. Very frequently, they’re going to lower that pin as low as they possibly can, stack on as much weight as possible, and bang out ten repetitions.

Now, the problem with these repetitions is, well… They’re god awful. This is putting them at risk for injury, for one. For two, they’re having to incorporate other muscle groups and momentum in order for them to actually get the weight. Thus, making this “isolation” exercise more of a compound movement which is not as effective at stimulating growth, specifically in the chest.

Finally, they’re also focused on just lifting a weight from point A to point B, as opposed to moving the insertion and the origin points of the muscle it’s trying to target. Which again, is standing in the way of your growth potential.

So as opposed to focusing on eagle lifting and trying to lift as much weight as possible, the intelligent method is to recruit the single muscle you are trying to target the most. It’s important to master your form and use your mind-muscle connection to ensure that you are constantly thinking about which muscle you are trying to workout. This will help you get the most out of each exercise and give you the most growth.

Typically, how you would perform a set is as such; one rep, two rep, all the way to ten reps, sets finished. Now, you may have pushed yourself with some intensity, but did you know that there’s another level that you could have taken that set to?

Intensity increasers are ways to make the set that much more grueling and that much more demanding, to stimulate much more muscular growth. What you should be doing is a drop set. An example of a drop-set is this: finish your ten repetitions or the point when you hit failure. Pull the pin out or lower the weight by 20-25%, go back to the exercise instantaneously (no resting). Then, perform as many repetitions as you possibly can. Rinse and repeat this for around 4-5 times and you’ve just pushed your body a lot farther than you would have before.

It doesn’t just stop at drop sets! We’ve also got rest pauses. once you hit that tenth repetition and hit complete failure, take around 10 seconds to catch your breath. Feel the muscle group that you’re trying to target and let it rest for a bit. Then, go ahead and try to perform as many repetitions as you possibly can, with the same weight.

The same can be said with partial repetitions. So you’ve hit your tenth repetition, now what you’re going to do is try and push out as many half repetitions or quarter repetitions or third repetitions that you possible can until you hit the point where whatever muscle you’re trying to target can no longer lift the weight.

Implementing these intensity increasers to not only your chest workout, but all other workouts, will definitely maximize your growth potential and push you to that next level.

Chest Training Mistake #6: Not Warming Up

The final item on this list is not properly warming up before every single chest workout. Let’s start this off with a personal story…

About seven years ago I went to the gym and I wanted to lift a heavy bench press. I loaded on a plate and performed my set, then I loaded on two more plates, jumping drastically. I didn’t warm up or anything. Eventually, I got to my third plate (which was within three sets), then I got my fourth repetition and as I was pressing that weight back up, I felt something pop.

Guess what happened? As a consequence of me not properly warming up and jumping up way too much in weight on the bench press, I ended up tearing my AC joint. For the next two years after that, I had my AC joint tear hinder me on almost all of my workouts which really stunted me from doing any type of press exercises.

By not properly warming up and getting the blood flowing in the areas you’re going to be utilizing, you’re putting yourself at risk for major injuries. These injuries could last for weeks, months, or years, which will substantially reduce your muscle growth and affect your workouts for a long time. 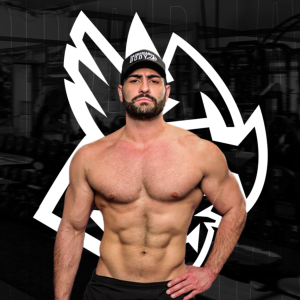 Creator and owner of Barbarianbody.

How to Build Muscle and Lose Fat at the Same Time

How to Get WIDER Shoulders FAST! (With Only Dumbbells)